Whew, it's been a minute! Been busy getting life around the house straightened out. We're expecting a baby boy in June, which requires a good deal of moving the other children around in the house, painting rooms, and all sorts of other work. Work work work. Which has left me completely unable to keep up with blogging here at the ole Pack of Gnolls.

However, it seems most of the work is complete, and I have some more time now to produce some more material for this here blog.
In the next couple of days, I'll post an update on how the Kids' Campaign is going. We've had two sessions since my last report, and they are about ready to start delving into the Underdark. However, next session will be an exploration of this cavern complex: 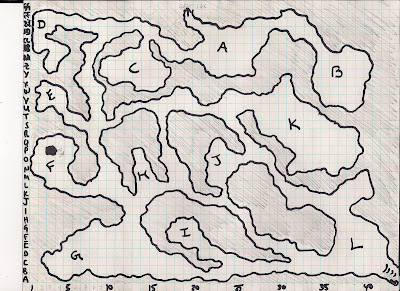 If you're at all familiar with the AD&D 2E "Night Below" box set module, this cavern complex exists below the caves in which the "Goblins of the Ring" from Book 1, The Evils of Haranshire, reside. The PCs are about to explore these caverns, as this is where the goblin shaman found his malfunctioning Ring of Water Elemental Control, and they've been blocked off ever since, due to some big nasty monsters that lair down there.
Now all I need is to figure out what goes where...
In the upper middle part is an arrow, which is the passageway that leads up to the goblin lair. In the bottom right is a passageway that leads to further caverns below. I'm sure this cave system eventually winds up in the Underdark. The pit in area F probably goes down to a lower level as well. I probably could have ordered the letters for keying the damn thing a little better, but it's late, I've had a few beers, and I gave blood today, so I don't care.
Feel free to use this map in your own game, or write up your own key for it. I don't care. I just put it on the internet, which means it's free for everyone. I would appreciate a comment below if you do use it, or post it somewhere else.
PS: the baby's name will be Avery Linn Sullivan
Posted by Sully at 7:54 PM

Teaching the Gnollpack to play Magic: the Gathering

Hey it's another blogroll